I asked some friends if they knew of any unusual stories about devil rocks. Some of them have mentioned that they were familiar or have heard stories of rocks that are associated with the devil. One person mentioned that he knew of a rock, down around Con Bay North, that has the devil’s hoofprint and another said that there was a devil’s rock in Renews. There is a Devil’s Hole in The Bay Roberts area..

Link to info on The Devil’s Rock, Renews

Also, as mentioned  in an earlier post, there is a rock on Kelligrews Beach that is called “The Devil’s Jackstone. Picture below.

According to Nick Wadden’s blog, there are five such rocks in the Kelligrews area. I’m thinking another one is the big rock on the corner of Long Shore Rd, in Kelligrews. Picture #2. Note: There are five stone used in the game of jackstones… See video below 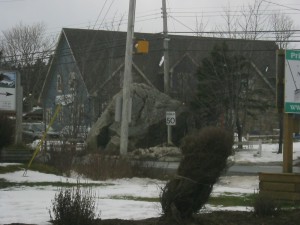 If there are five, where are they? They are big and in the Kelligrews area. Anybody know how they got the name Devil’s Jackstone? Note: Someone had to be familiar with the game. See video below.

Maybe there is an older person, in Kelligrews, who might have the answer. I just spoke to a friend, who was not familiar with the story, and he said that there is a big rock around Ledrews Rd.  Nick Wadden, in his blog, mentions this rock. About a week ago, I drove out Ledrews Rd,  and did not see the rock. One of those days I’ll take a walk, in the area, to see if I can find it and get a photo.

This was not a good weather day for walking, so I drove down to Topsail beach to take a few pictures. I din’t walk the beach as it was wet and not a good day for walking on beach rocks. This beach is a favorite for residents and tourists. There is a walking trail and you can get a good view of Bell Island, as well as Little Bell Island. In the summer, you can laze on the grassy areas, walk the beach or view the many boats that are on the bay. Take time to enjoy a picnic as well. 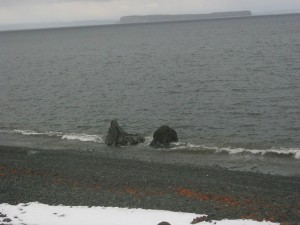 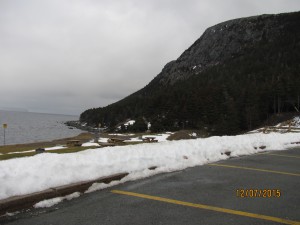 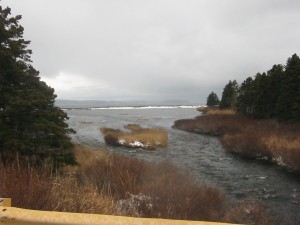 Noticed a number of sea urchins on the trailway today. They were dropped there by seagulls. See the video clip below to see how they get at the meat. The shoreline looks something like Newfoundland Labrador.

I decided to walk down the bank, of the trailway, to the rocky beach below. A lady friend of ours, who is in her eighties said that she now walks on Topsail Beach. For those of us who are familiar with that beach, it is comprised of medium and larger size beach rocks. She has had a hip replacement and feels that the beach rocks gives her better coordination and strengthens her leg muscles.

Well, if she can walk on beach rocks, I should still be able to walk on rocks as shown in the third photo. The climb down the bank wasn’t too bad but, at 67, it’s a little more difficult to walk and jump from rock to rock and around boulders. It was fun and invigorating though and I will do it again.

Oh yes, The Tiger Woods hat. It was washed upon the rocks. I can only presume that it blew off someones head while they were boating on the bay. It looked in good condition, despite the beating from the saltwater and the rocks. I hung it on the top of a small tree as shown in the photo. We are scheduled to get bad weather, wind and snow, so I decided to go back today, Dec 3rd, and retrieve it. The cap was still where I had left it. Anybody want to buy a saltwater washed, rock and weather beaten “Tiger Woods” baseball cap? Note: see last photo showing our weather today..Dec 4th 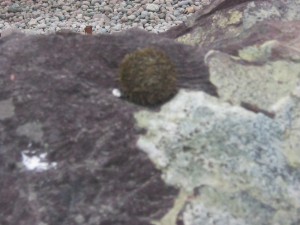 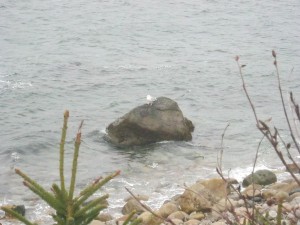 Down the rocky beach 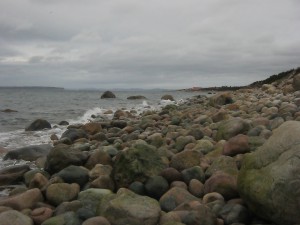 Someone lost their Tiger Woods cap 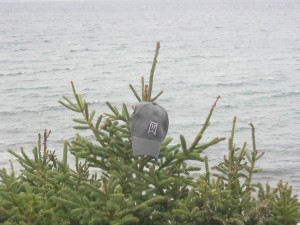 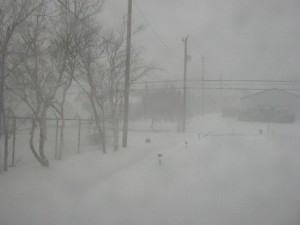