I have made many trouting, bakeapple picking and hunting trips from the gravel parking lot at Split rock. I guess my first time, walking the barren trail, was back in 1960/61. If I remember correctly, my uncle Guy took a few of us on a fishing trip and we fished in a few ponds and gullies about a ten minute walk from the road. 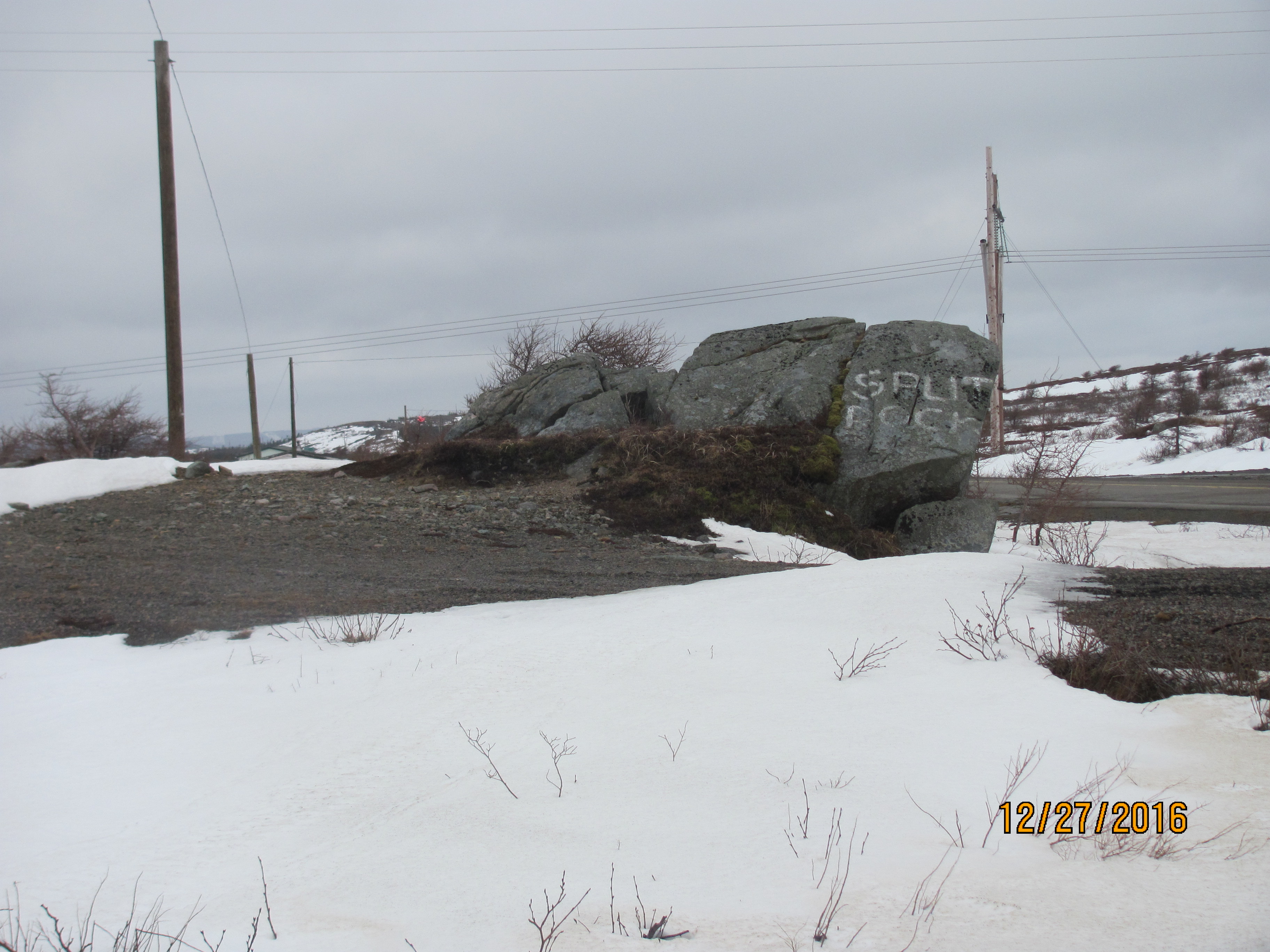 Yesterday, Jan 28, 2017, my son and I were moose hunting and we were checking to see if we there was enough snow to use the skidoos. We decided to drive in the power line access road, at split rock. There were no signs, denying access, so we ventured on.

We were surprised at how far the road went back into the countrty. The photo was taken of the split rock that is about a ten walk from the highway. 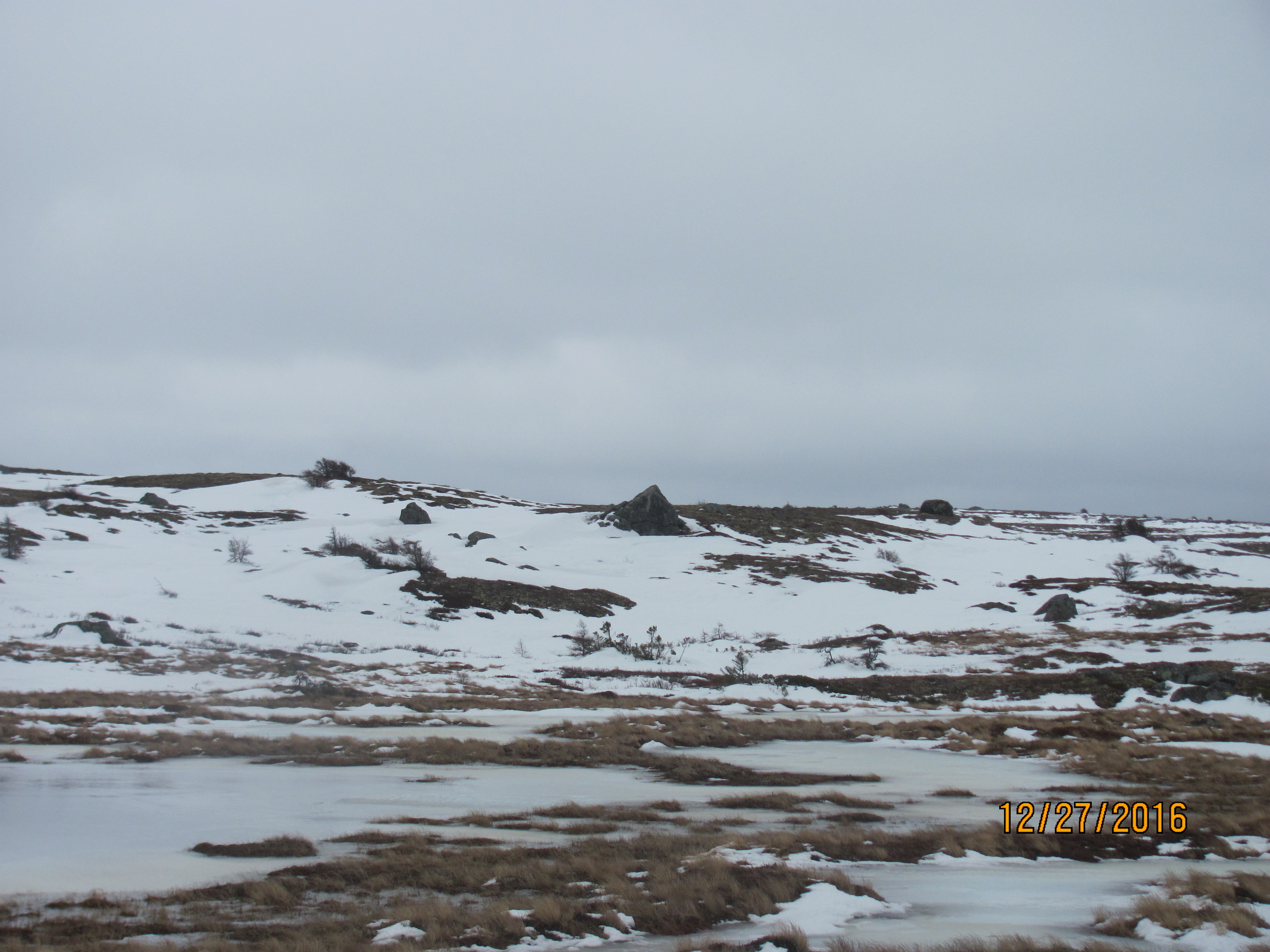 the road curses to the right and extends a little further into the country. We figured that, if we started our walkat that point, we could cut about a half hour from our one and one half hour walk. Hopefully, they will allow access to the maintenance road. I never thought i’d see the day that a road would extend this far into the country. 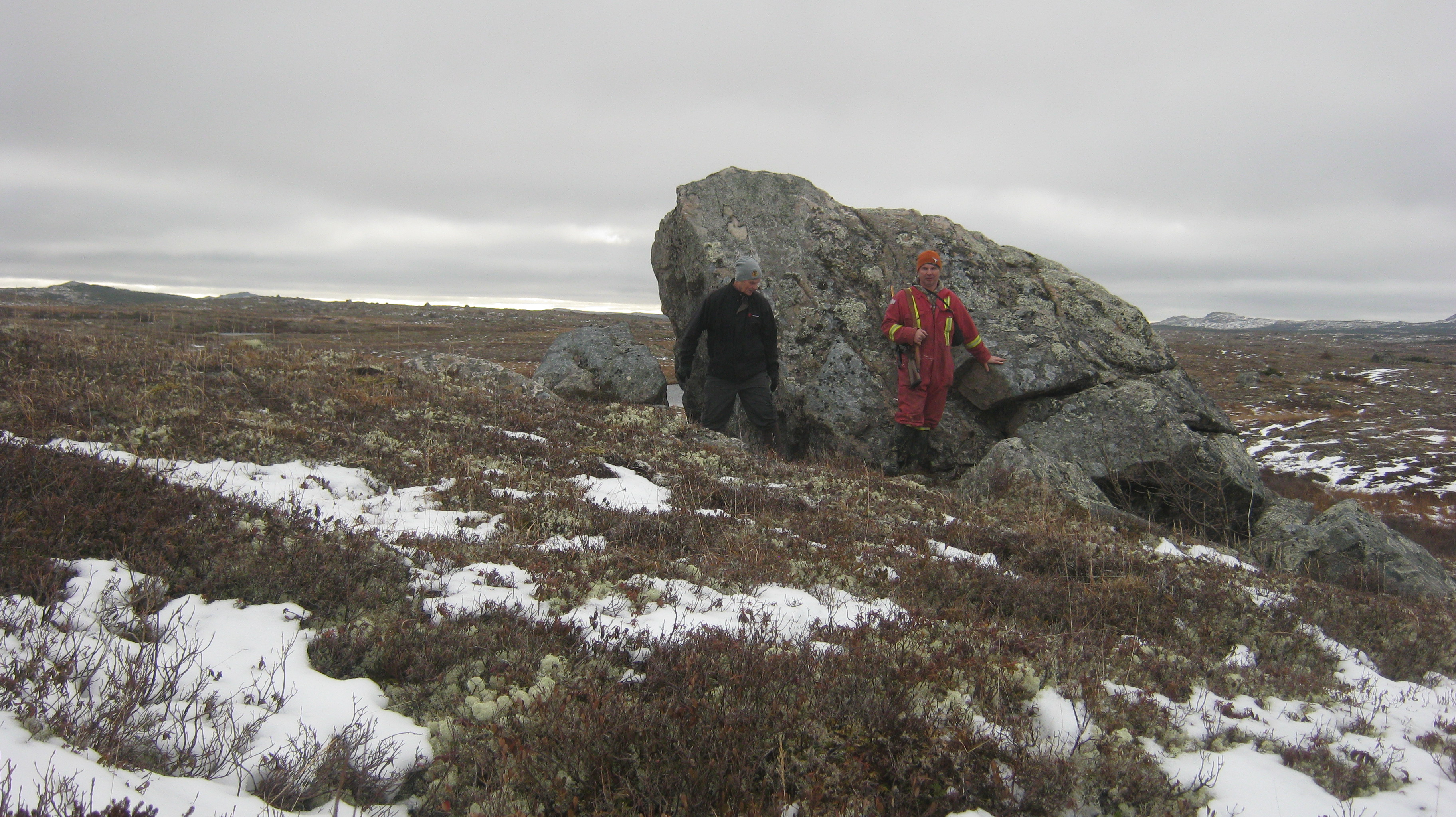 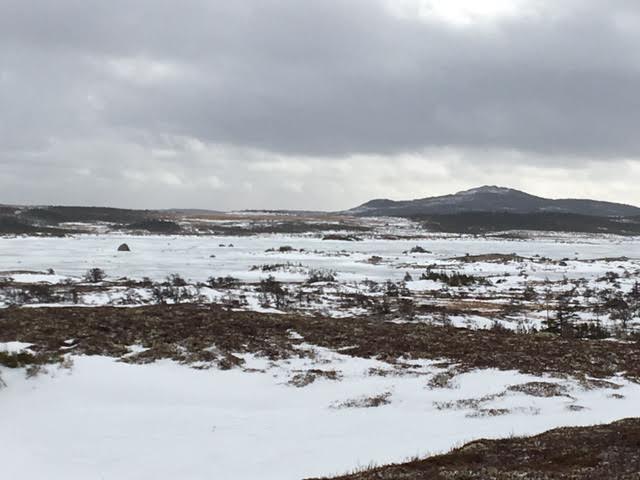 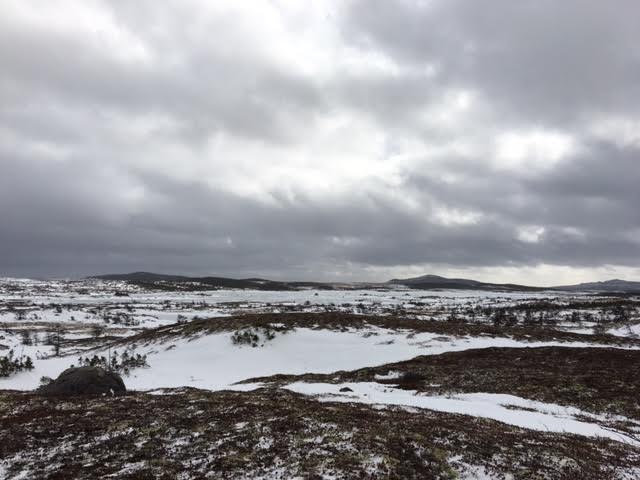 This may seem to be a strange topic for a blog post, in rocksnl but I feel that there are many people, like me, who are frustrated with the cost and early replacement of their brakes.

Recently, I took my car to have the brakes checked out and was told that the cost would be over $600.00. The disc brakes and calipers had to be replaced. Fifteen months ago I had the same work done. There was only 10,000 miles on the ones that I had replaced. I only drive in a rural community!
The following was taken from an online website. Click here   for further info

I did bring the original invoice to the garage, prior to having the work done, but couldn’t get an answer as to why I had to have the brakes replaced in such a short mileage span.

In my opinion, I was taken in. There is no way that the brakes should wear out that quickly. It would mean that I would have to pay over $6,000.00 in brake repairs if driving 100,000 miles.

Anybody else having this problem??

Fish and chips, Fish n chips, Fish & chips
Fish and Chips was made popular in England. The basic menu is deep fried fish, which has normally been cod fish and fries. The fish is deep fried in a batter. There are many variations of batter mixes.
I have tried fish n chips in London in many places in Ontario and in my home province of Newfoundland Labrador. My wife and I thoroughly enjoy, Ches’s Fish and Chips as well asScampers in St. John’s NL.
We have had many meals of fish and chips since I started this post. The latest was at By The Beach Restaurant in St Phillips.  Aug 11/17. I had heard rave reviews about their food and as we were in the area on Friday we decided to stop there for supper. The restaurant was extremely busy, being a friday and it was a sunny warm evening. You place your order at the counter and find a seat where possible. We ordered a one piece fish and chips each. If I had thought about it, I would have ordered a two piece, to share as one piece was enough and we never finish the french fries.
The order arrived within twenty minutes. The fries were home made and plentiful. The fish had a slight crispy batter and was quite good.
My preference is still The Seaside, however; we would go back with friends to the By The Beach Restaurant. You can read a review, by food critic Karl Wells, here.
The Seaside Restaurant, in Chamberlains NL is where we usually order take out.  We’ve had fish and chips, from their take out menu a number of times, while home on vacation. We returned to Newfoundland, in Sept 2014 and have ordered fish and chips many times and always enjoy the meal.
Our latest take-out from Seaside..a two piece fish and chips 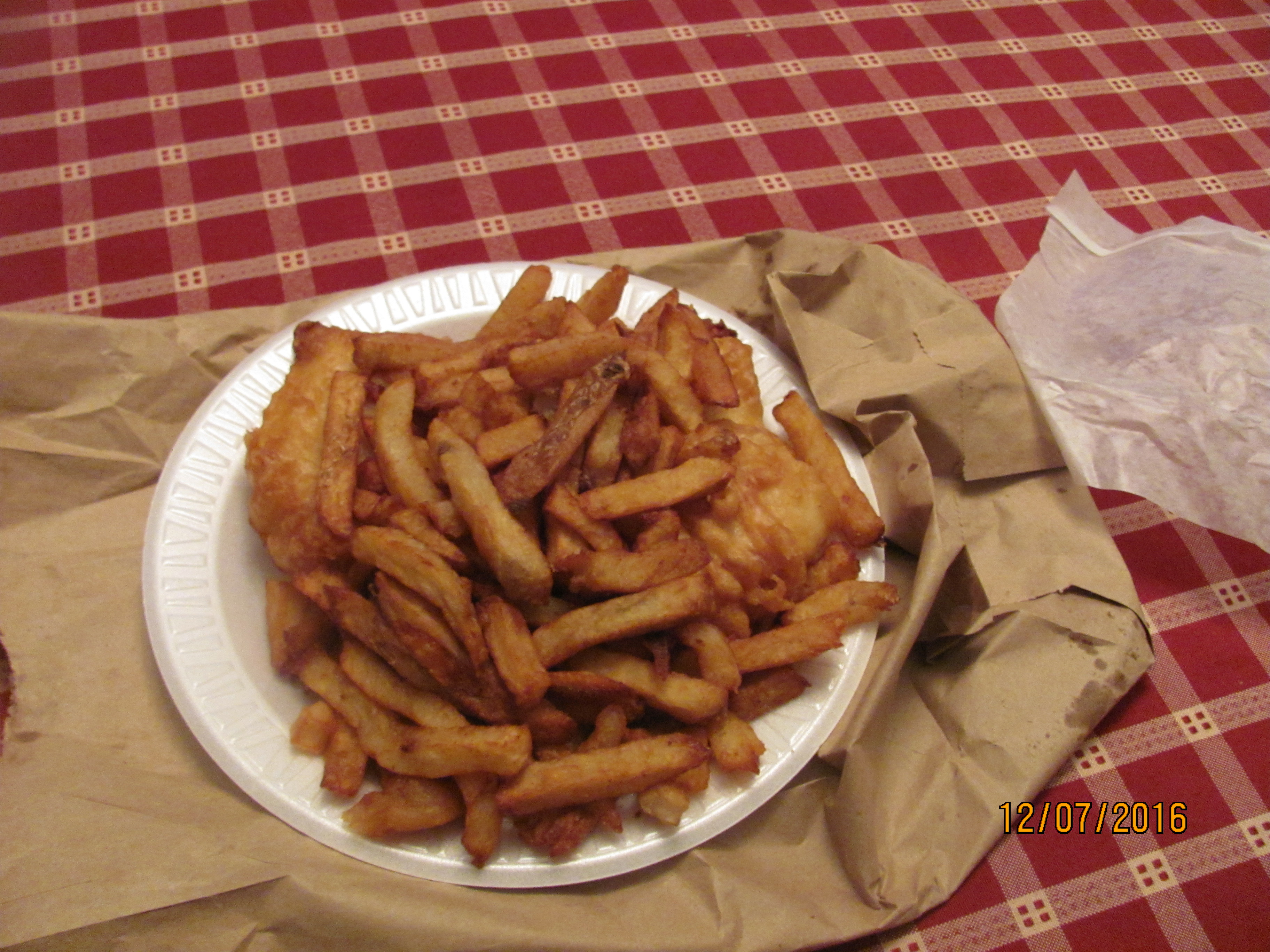 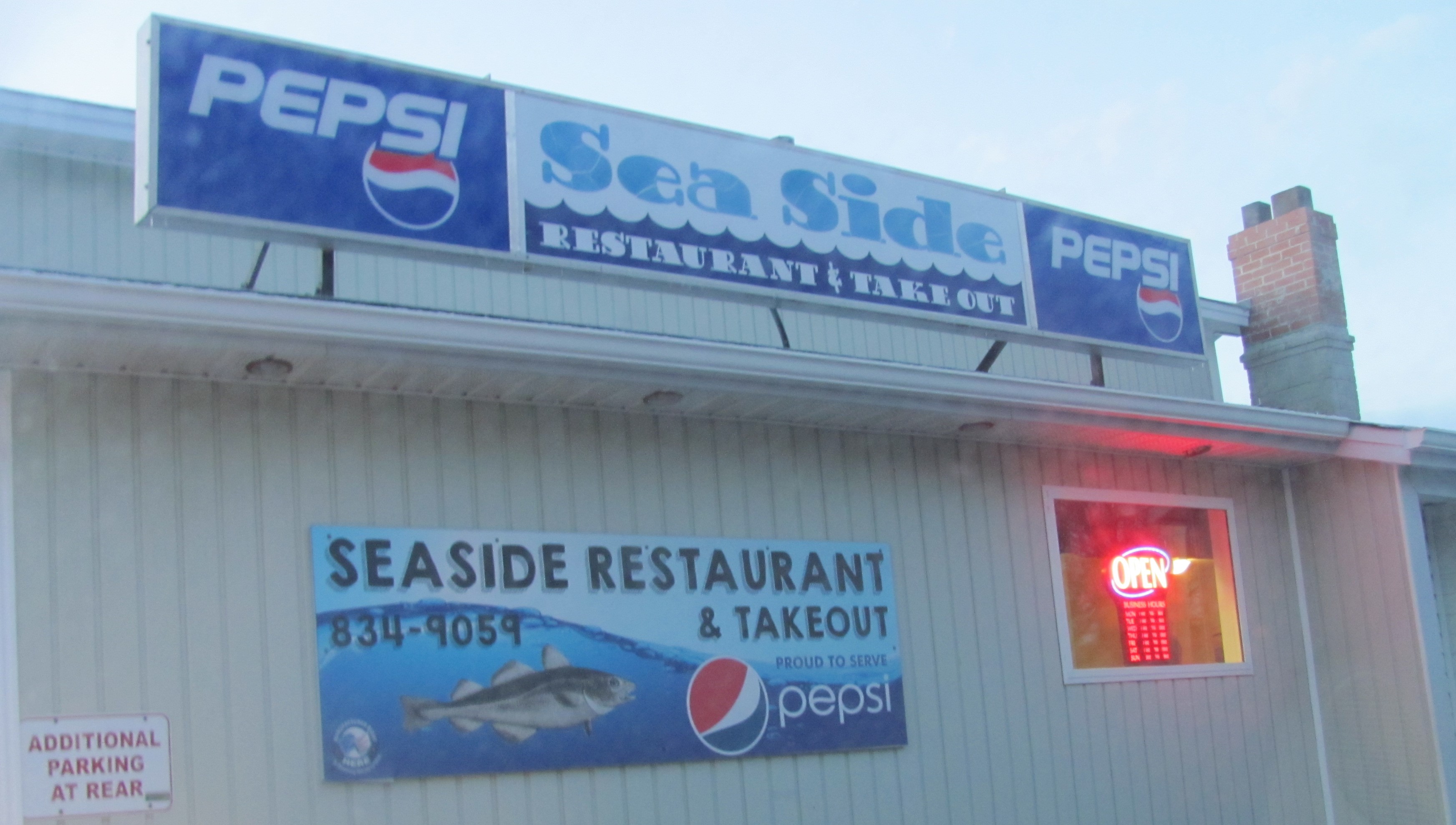 The best meal of fish n chips we had was at Jackie’s Restaurant and Take Out in Rocky Harbour NL. The batter was not too thick or greasy and the fish was mouth watering. The fish was flaky and white. Our son, who has eaten fish in many parts of the world and has eaten at some high class restaurants said “this is the best fish that i’ve ever eaten”.  It was simply delicious.
Do you have a favorite place that you enjoy going for a good meal of “Fish N Chips”?
Please send us an e mail. Let us know the name of the restaurant, the location and your comments.
Also, let us know if you want your name published. First names only would be preferable.
Our son in law has treated us to a few meals of his home made deep fried fish and chips. He uses a batter that his mom used in a take out they had many years ago.
Some readers suggestions.
Ches’s Fish and Chips on Topsail Rd in St. John’s NL..Donna
Leo’s Fish and Chips in St John’s, NL..Darlene

Seaview Restautant, Con Bay South.. Chamberlains Steve.we always have take out. We did  eat in for one meal, however; it was Friday and there was a soccer team, from Ontario eating there and there was a number of other orders ahead of us. A bit of a way wait but the wait was worth it.

Denver’s, Kelligrews Newfoundland: We returned to Newfoundland for a weeks holidays and ordered a meal of fish n chips for four people. It was a takeout order.

The fish was pretty good with loads of fries. Have ordered from Denvers on a number of occasions since returning home. It was good!

Just read this article about Aggie and The Atlantic Kitchen. Link here.  The restaurant is located in Fort Saskatchewan, AB. What’s their fish and chips like? Would you recommend ordering?

July 24, 2015.. Ordered fish and chips at The Truck Stop  in Arnprior. It was the worst meal of fish that I have eaten. My wife could not eat her fish, We have had many good meals at this restaurant and would highly recommend the restaurant to friends, however; would not recommend the fish and chips. The fish was haddock. Note: We contacted te manager and they changed back to their original recipe.

Dicks’ Seaview Lounge and Restaurant on the beach on Bell Island serves up a good meal of fish and chips.

To send an e mail:

One of the worst meals of fish and chips that we had was from a chip truck in Arnprior. It’s on the mall parking lot. We have had some good take out food there but the fish and chips was 50% batter and full of grease. Would not recommend.

Since returning home we have eaten fish and chips at

Jungle Jim’s Con Bay South.. Better then expected. Three of four of us had fish and we enjoyed our meal. Good

Mar 13,15: Denver’s Kelligrews. Take out 2 pc fish and chips. The fish was tender and flakey with a light deep fried batter. This was good fish

Apr 3:15: Denver’s Kelligrews. Ordered  take out fish and chips for party of six adults, The restaurant was extremely busy. The fish was fresh (cod).  Good quality.

I haven’t been able to write a blog post as Christmas and the first week of 2017 has been busy with family, visiting from, “The Mainland” and enjoying family gatherings with dinners and potlucks.

I have travelled from and to St John’s on many occasions and I have been fortunate to have had only one or two delays or cancellations, although I do remember one Air Canada flight that made two attempts to land but returned to Halifax. It was finger biting time as the aircraft, on two approaches, almost touched the runway but had to avert the landing. I prefer roller coasters! .

On Dec 25th, we were waiting for our daughter and family to arrive from Ottawa..The weather was bad with winds and drifting snow. An announcement came, over the intercom, that an Air Canada flight was circling and awaiting for the runway to be cleared. Then another announcement that the flight would be returning to Halifax. I recalled my roller coaster experience. The Westjet flight was shown as arriving early and we eagerly awaited their arrival, only to be informed that the flight would be returning to Halifax as well. I often wonder why the airlines,on occasion, fly to a city knowing that the chances of landing are low. We, as well as others were frustrated but better to be safe. They did arrive the following afternoon and we had a great holiday season with them, with other family members, our extended family and friends.

Looking forward to filling in all the blank pages of 2017. I once read or maybe I coined the phrase..”today is the tomorrow you planned for, work tomorrow’s plan today”..still trying to get my head around that phrase..it may be related to, “don’t put off until tomorrow what you had planned for today.”

Praying and hoping that the the blank pages of 2017 will be filled  joy, peace, happiness, good health and success stories..