Pictures taken on my walk around The Landing Place Pond, Marystown. This is where I spent many of my early childhood days. We would go there to swim, to trout, to catch frogs and tadpoles, to explore, and in the winter to play on the ice. This pond holds a ton of memories.

This is The Mill Brook which runs out of The Landing Place Pond and passes just a few yards from where our home was located. It wasn’t overgrown like it is now. There once was a dam, where the brook leaves the pond and another just above where we lived. Years before I was born,there was a saw mill on our property. We would swim where the river had been dammed. The dam was adjacent to our land and only a couple of minutes from our house.

This was our swimming hole. The town has made many improvements to the swimming area and there is now a popular walking trail around the pond. About twenty to thirty feet offshore yo may find remnants of our Hillman “Diving Car”. Story below photo. 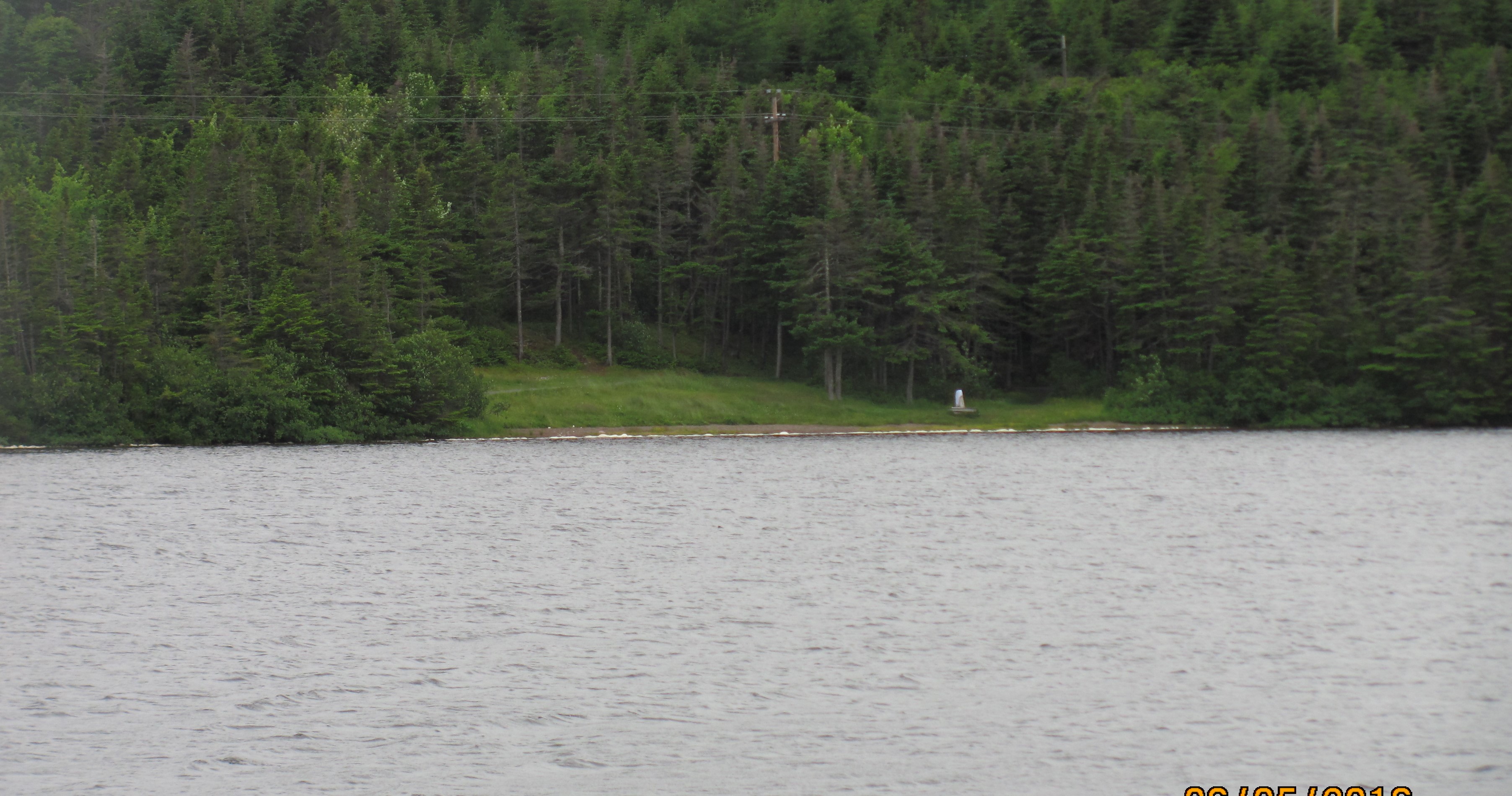 The day Beulah almost drowned..There were a number of us swimming and some lazing on the grass. Beulah was only about 8 years old and had somehow found herself alone out by the lilly pads. None of us noticed that she was missing. Than we heard a shout and water splashing. It was my older brother. He swam out and pulled Beulah from the water. They performed artificial respiration on her immediately and she coughed up water. Beulah would be ok but it made us heed our parents warning to stay out of water that was over our heads.

Trouting in The Landing Place Pond

A small brook called The Mill Brook ran by our property. The brook originated in The Landing Place Pond and we would fish the brook to the pond. If we hadn’t caught a meal of trout, we would walk the right side of the pond to a small cove. This was a good spot to swim but also one of our favorite fishing spots. We used a bamboo pole and a bobber.

One hot summers day, when I was seven or eight years old, we were fishing in the cove and catching lots of trout. We looked up to the gravel road and there was a police car stopped and the mountie was looking our way. Knowing we had caught too many trout, we paniced and ran home. I remember crawling under our house to hide. I stayed there for a few hours. We found out afterwards that he was checking out a man that had a fire lit and there was a fire ban on.

The Diving Car in The Landing Place Pond

Many of us had our favorite swimming hole and usually there was a diving rock or a rock to dive from. We swam in a pond which had a diving rock but it was out too far for us younger boys to reach. We  decided to get our own diving rock but we wanted it to be different.
The father, of one of the boys had scrapped an old Hillman car and the frame was on the side of a road about 2 miles from the pond. As seven and eight year olds, we used to play in the car and crawl throgh the windows and drive the car to our hearts content. We decided that this would be our diving rock. But how would we get it to the pond? Well, we decided that we would roll it.over and over to The Landing Place Pond.
I don’t recall when we started to roll the car but we would meet at the site, after school, and roll the car a few times. This was not easy as we were young and the frame was very heavy but we were ingenious and used every thing we could find to help us roll the car.
We had to go up a slide path (path used for hauling wood in the winter times) which was about a half mile long  and on an incline. There were trees to cut down and levers to make and ramps to build and rocks to move out of the way but we were determined. There were many near misses, when the car would tumble back toward us. We were fleet of of foot and laughed it of. We couldn’t get hurt and all we saw was a car for a diving rock and windows and doors to swim through.
I guess it took us two months to get the car to the main road which was about a mile from the pond. Thankfully, someone tied the car to an old truck and towed it up the road for us. We were almost there. It was all down hill, to the pond, but we had to cut trees before we could begin the roll. Excitement was mounting. It was now late June and we would soon be swimming through the windows and diving from the roof.
Finally, the car was at pond side and we began to roll it out. Some bigger boys came to help.  We were so excited…jumping up and down in the water. Finally the roof was just above the water..”that’s far enough”  we shouted. But the older boys had other plans and they took our diving car and rolled it out so we couldn’t reach it..we were mad..we were angry..they stole our diving car.
Come back to read
Uncle Sam’s two big mud trout
Gordie, lost in a winter storm.
Jack and his longjohns
The inner tube triumph
The game of laying ducks eggs.
The Christmas Seal