Photos of our walk today..below the bridge.

Only a couple of people on the trail today. Weather was cold with a few flurries. There was a jogger, singing loudly along with his iphone. He was oblivious to us. In his own world!

Manuel’s River is where we spent many summer days. We swam in bubble pond, the flats, the falls below the bridge and up in the canyon.  We fished for trout from the flats to Paddy’s Pond, tried to climb as many cliffs as possible and just lazed around walking the banks and the river. We would cross the river, where the first bridge is at and climb the bank to Brent Bergs for ice cream or a soft serve. 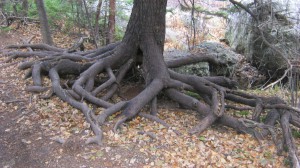 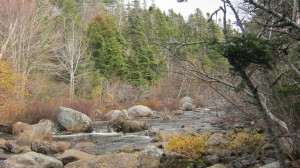 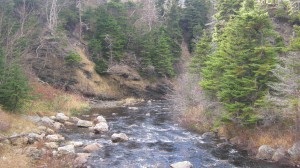 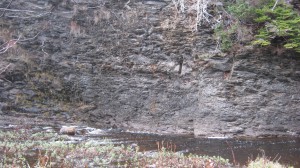 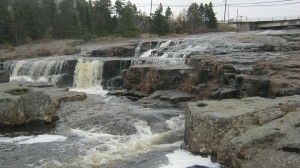 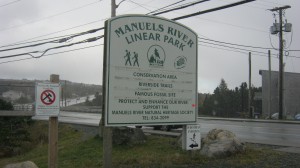 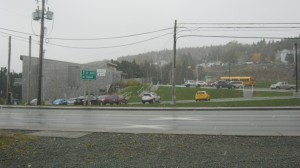 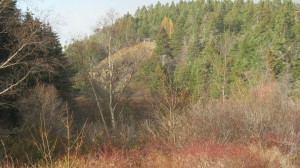 The picture, below the tree roots, is looking down to what we called Berg’s Scrape. This was a good place for trouting and Berg’s dump was just above. Before garbage collection, many people had a dump somewhere on their property. I worked at Ted Butler’s store and he had a dump, at the back of his property, prior to Rideout’s picking up the garbage.

The photo on the bottom right is the cliff above bubble pond. We could look at the sea trout in bubble pond, from the cliff. Also, we would throw rocks and see how far we could throw them. One day we were doing this and we didn’t see Father Jackman. He was reading his bible as he walked the grassy path. The area was a grassy field when we were children. He didn’t show any sign that he had heard us but we ran so he wouldn’t know who it was. We aren’t of the Catholic faith but Father Jackman was always friendly and said hello to us.

I recall, when I was around ten years old, trying to climb the cliff which is shown on the picture above the sign. My brother Sam and our friend Johnny got to the top but I got stuck on a ledge. They were a couple of years older. Both of them came back down and helped me get down off the ledge.