A friend of mine asked me, about two weeks ago, if I would go smelt fishing with him. The last meal of smelts that i have eaten was purchased from Sobeys and I really didn’t like them. I prefer caplin. Anyway, I told him to let me know when he was going. We spoke on sunday and he said that he was going on wednesday and that he had invited another of our mutual friends.
I said yes, however; my wife told me that, if I caught any, not to bring them in the house She remembers the smell of smelts being fried in her parents house and didn’t want a fish odour in our house.

Well, I asked a few family members and friends if they liked them and some of them said yes. So, if I catch any I have someone to give them too. Are you allowed to give away smelts?

It’s wednesday morning and preparations have been finalized. We will be leaving at 9:00am. The lunch has been prepared, the thermos is ready and off we go….it’s a beautiful sunny morning, no wind and the temperature is -4 and going up to plus 2 and sunny. A perfect day for smelting or trouting. Let you know how we made out.

We arrived at the pond in North River at about 10:00am. Forgot to stop at the store to purchas tear drop spinners with a small hook. So we had to drive back about a mile to buy the spinners.

There were eight or ten other fihermen on the pond. Our friend Wayne knew a fellow whose name was Bob and he had caught a couple of dozen smelts. We each drilled a six inch hole and started to fish. Wayne was catching smelt, while Calvin and I were getting blanked. Finally Calvin caught a few, however I was getting nothing. Bob had to leave to pick up his wife so he said I could use the hole  where he had caught a few dozen smelts. He was very generous as he left eight fish for me.

i caught one smelt for the day. It was humbling as everybody else had caught at least a dozen or more. Before we left to drive home, Bob gave me another five smelt that he had caught after he retuned from taking his wife back to work.

It was  a  good day. Even though, I would have liked to have caught a couple of dozen smelt, we had a great day. There was lots of laughing and good natured ribbing..Looking forward to our next trip.

This is Bob…met him on our fishing trip..”.A salt of the earth man”..showed us some techniques for catching smelt,,thanks Bob 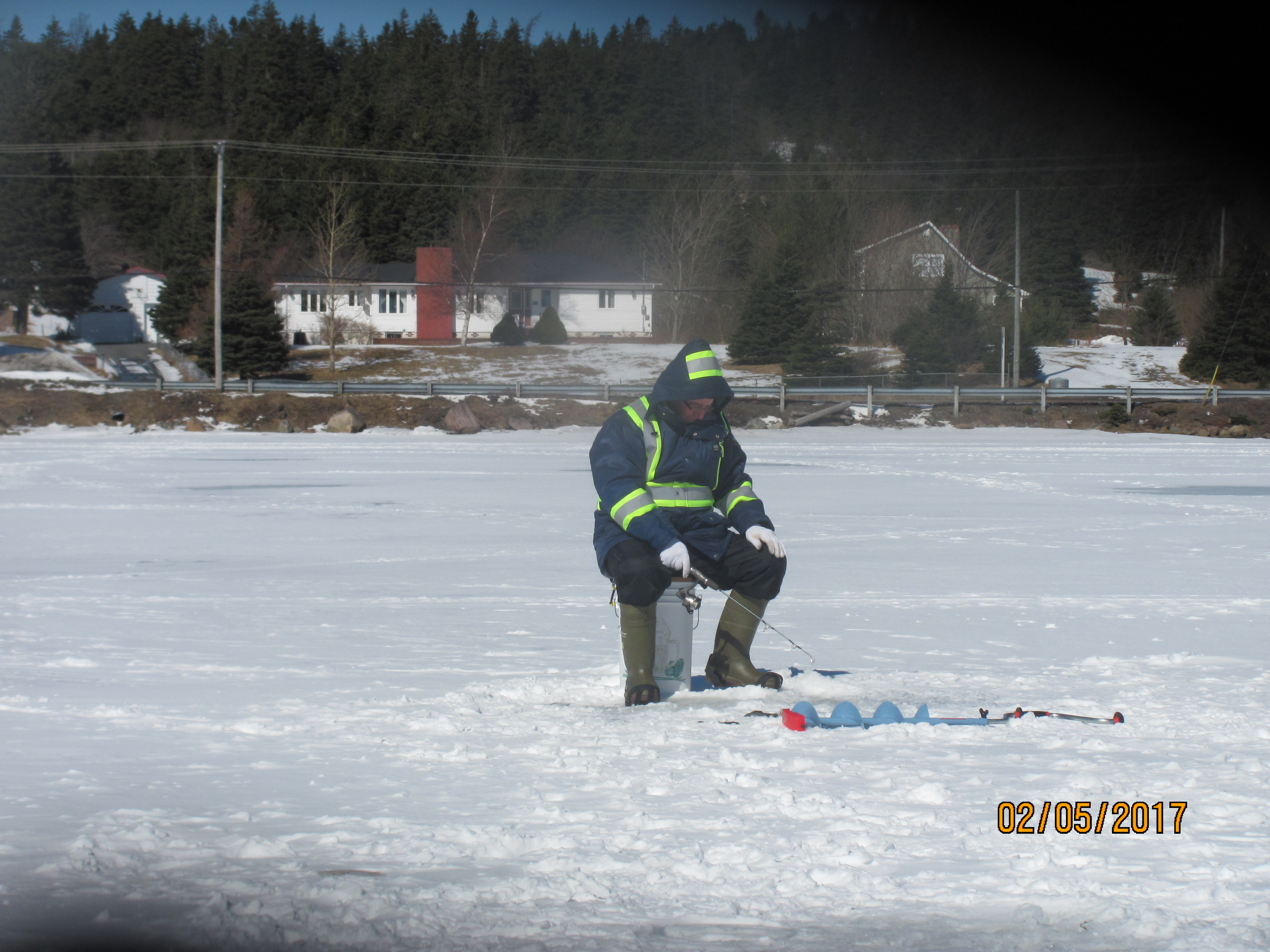 A little comfort and a break from the wind.

The pond is beginning to open where the river runs toward the bay. River is to the right. Not in this photo.

I will be frying the smelt today. Will try and remember to take a few photos.

He should know. Gander Beacon

I fried the smelts and had then for supper wiith, fresh cod and fish and brewis. Sounds like a big meal, however; we had another four family members and their young children coming for supper. Forgot to take photos, We fried then in vegetable oil and added a little butter for browning, We rolled half in flower. The ones rolled in flower were the best. There were some left-over so I had them the next day for lunch.

Note: I found that they were better when I put them on a frying pan to re-heat, They were crispier then heating them in the microwave.

The best time for catching smelts is at high tide. We always arrived, at the pond,  as the tide was falling and caught far less fish than those who were there early in the morning when the tide was rising. We had to drive over an hour and our driver is not a morning person.