Is the word landwash a Newoundland word or is it used elsewhere. The word was used regularly by adults and children on the Burin Peninsula. I was reminded of the word when I saw the following photo and caption on Facebook. It was posted by Austin Clark from Marystown.

There is an interesting article, in the September 17, 2014 isssue of The Compass, by Marina Gambin about her childhood in Branch and the fun she had playing on the landwash. Story here

We spent many hours in the spring, summer and fall down on the landwash, that part of the land that was washed by the high tide. We would skip rocks, watch the sand floating on the rising waters, look for clams and other marine life that got caught when the tide receded. We would use our bamboo poles and try and catch anything that would take the baited barbed hook. We gathered kelp for the gardens and picked up squid that  were on the shoreline. The landwash was a playground.

I always thought the pronounciation was lambwash. Also, there is a pond, in Creston called The Landing Pkace Pond which we thought was Lamb Place Pond.

I guess this is the landwash, in Foxtrap, covered by ice

The landwash in Upper Gullies 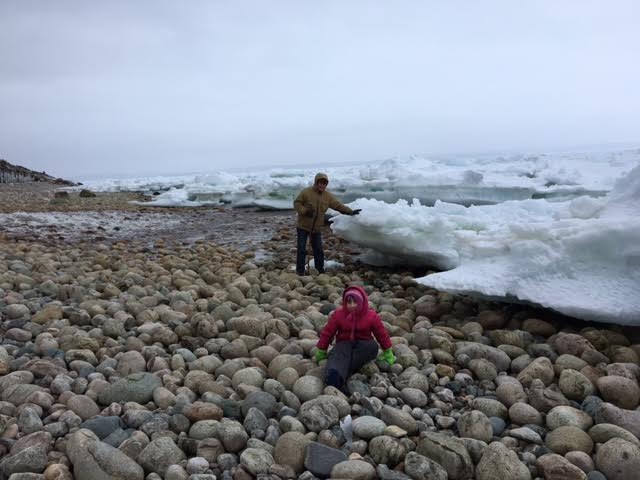 The next few blog posts will ontain a couple of stories from my childood in Creston and memories from the landwash.